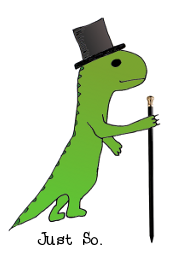 I love lizards, so that is why my main protagonist is a lizard. I often photographed lizards when I lived in Florida.

Although Reginald P. Lizard exhibits anthropomorphic qualities, such as walking on his hind legs, wearing a top hat, and carrying a Victorian walking stick, he often acts like a real lizard, including push-ups, moving quickly, and eating flies. This lizard is a subtle character who speaks few words—usually just one or two. Although he's clever, quick, steadfast, reliable, an inventor, and a natural leader, he sometimes gets idée fixe (fly-on-the-brain), which incapacitates him.

My sister and I call him RPL for short, which are obviously his initials. In the books, however, he is always known as "Reginald P. Lizard." His middle name is 'Pastorius,' which is the last name of the amazing jazz bass player "Jaco Pastorius."

RPL most often wears a top hat and carries a Victorian walking stick. Depending upon the situation, however, he may wear other hats, e.g. a captain's hat while he captains a ship.

He has a half-brother named English Harry who is a detective on a tropical island.